Now, that we’re past feedback and the preliminary editing, I can get into the real matters at hand like dialogue, action. setting and this week’s topic – character development.

The key to any good script is creating great characters. These beings you write on the page help to bring your stories and ideas to life. Each character on the page is a part of you (whether consciously or subconsciously) when you begin writing or revising – fiction, non-fiction or equal parts – your screenplay.

This book can a major help in developing your characters:

Let’s get into the business of personalities and personal traits. When writing a script, you must make sure that each character has their own distinct personality. Whether it’s an alpha (male or female), a sidekick or an antagonist, one-dimensionality is not accepted. Even villains have feelings and thoughts that make them complex. The best way to achieve this is by creating personality quirks that set them apart from other characters. A nervous tic. A personal secret. Anything that makes them stand out from the pack.

Here are the archetypes Vogler mentions in The Writer’s Journey:

The hero is the audience’s personal tour guide on the adventure that is the story. It’s critical that the audience can relate to them because they experience the story through their eyes. During the journey, the hero will leave the world they are familiar with and enter a new one. This new world will be so different that whatever skills the hero used previously will no longer be sufficient. Together, the hero and the audience will master the rules of the new world, and save the day.

The hero has to learn how to survive in the new world incredibly fast, so the mentor appears to give them a fighting chance. This mentor will describe how the new world operates, and instruct the hero about the innate abilities they possess while gifting the hero with equipment.

The hero will have some great challenges ahead; too great for one person to face them alone.  The journey could get a little dull without another character to interact with.

The herald appears near the beginning to announce the need for change in the hero’s life. They are the catalyst that sets the whole adventure in motion.  Occasionally they single the hero out, picking them for a journey they wouldn’t otherwise take.

The trickster adds fun and humor to the story. When times are gloomy or emotionally tense, the trickster gives the audience a welcome break by challenging the status quo. A good trickster offers an outside perspective and opens up important questions as they act as the comic relief to the story or the actions of the other characters.

The shapeshifter blurs the line between ally and enemy. Often they begin as an ally, then betray the hero at a critical moment. Other times, their loyalty is in question as they waver back and forth. Regardless, they provide a tantalizing combination of appeal and possible danger by creating interesting relationships among the characters, and by adding tension to scenes filled with allies.

The guardian, or threshold guardian, tests the hero before they face great challenges. They can appear at any stage of the story, but they always block an entrance or border of some kind. They were basically saying “Don’t pass go, return back to your nice bubble.” Then the hero must prove their worth through either tricky, intellect or action.

Shadows are villains in the story. They exist to create threat and conflict and to give the hero something to struggle against. Like many of the other archetypes, shadows do not have to be characters specifically. It can be any force preventing the hero from obtaining their goal. 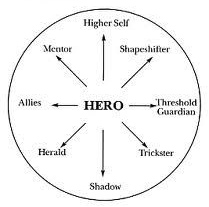 One note to remember: archetypes are good, stereotypes are not. When writing, you must create characters that are complex beings (human or not) that have real thoughts and feelings. It makes your story more interesting and compelling. There’s no room for one-dimensional tropes.

By writing this post, I hope you are better equipped to take on characters’ personalities and traits. Just remember that story is important, but your characters are what make the story. But this isn’t the end of the conversation, you can leave comments below and discuss this even more with your fellow screenwriters along with myself.

Come back later this week as I speak more about creating a character’s actions and dialogue.