Packaging Your Screenplay Part 2 – Revising and Shaping Your Bible

Once the logline and treatment have been revamped, you can focus other aspects. Any screenwriter with a vision will want one for when their big moment finally arrives. But once the revising and editing process has slowed down, revisiting the bible is a must. In today’s blog, I’ll tackle a screenwriter’s best friend – the series/film bible.

If loglines and treatments are the mission statement and slogan for your vision, then the story bible is the handbook of your well-crafted vision. It’s the foundation of your screenwriting. Your bible sets the tone for your story will be for the next 90 minutes or 5 seasons.

For me, my story bible has shifted quite a bit since I first wrote my pilot. The same premise has remained in tack, but episode orders, plotlines and more have changed as my needs for the overall story have. Remember to always keep your premise even as your story shifts from time to time.

With that said, let’s explore how to repurpose your story bible. 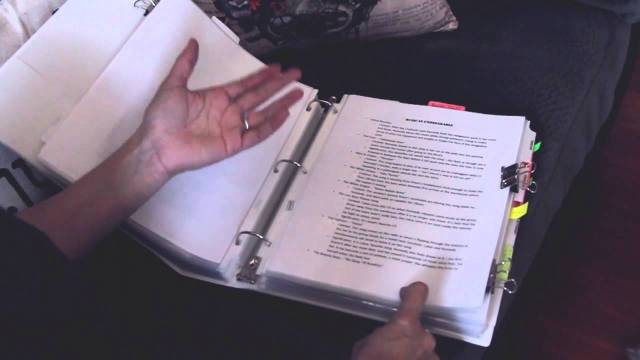 Retooling a story bible can be a daunting yet rewarding task as you want the bible to be in sync with your pilot. With that in mind, a series/film bible is described as:

a reference document used by screenwriters for information on a television series’/film’s characters, settings, and other elements that keep the content consistent throughout its course.

With loglines and treatments are short and concise, a story bible tends to vary in length depending on what stage in the process you’re at.

There are two schools of thought in television and film about story bibles. As mentioned by Screencraft, there are more traditionalists like screenwriting master Jacob Kruger who puts it as:

What they’re really asking is proof that you know what you’re doing, and that your series pilot not only has a fabulous premise and collection of castable characters we’d want to spend our time binge-watching, but also has the kind of engine required to run for at least five years.

He feels many producers and studios still have the mentality of world-building as king. He suggests the tried-and-true structure listed below:

On the opposite end, there is producer/script editor Lucy V. Hay who feels the traditional method can be boring and long. Hay champions brevity as she states, “Knowing this helps you focus your vision and your pitch to the right network.” She suggests this four to five-page format: 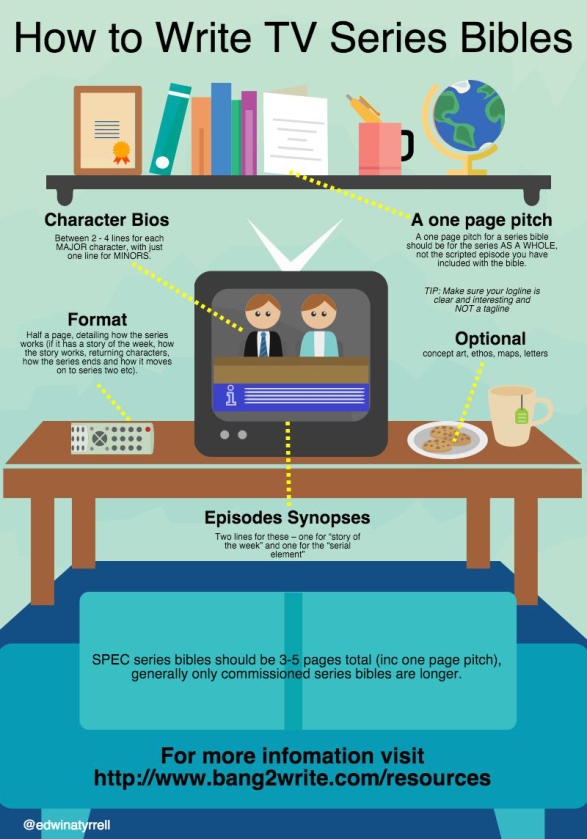 I have to admit I fall more into the traditionalist lane as I craft TV scripts with a series being the goal. I love the idea of world-building and giving background to every aspect of my script. While it is a challenge, I love having the vision to be fully planned out before someone sees my hard work.

The revising and editing process can make it hard to stare at your meticulously planned bible and say “I need to start over.” That moment can be a heartbreak for any writer especially your average screenwriter. It means you have to go back to the drawing board and go through the shaping and plotting all over again.  But it’s okay because you have shifted your vision, and your story bible needs to reflect that. You can still keep the bones while you lay on the flesh.

I’m going through the process as I write this blog. After rethinking my spec script, I figured out some of my issues are related to the bible I create. Now, I am reconstructing what my episodes and modifying my series trajectory.

When redoing your bible, you have to keep your screenplay in mind. It has to reflect what the themes, characters, plot, settings, and etc. are now rather than the previous revision(s). As I have gone through the revising process, I have found myself looking back at the story bible every time to see if it still captures the premise of my script. Now as I make some changes to it, I have to let the past go as I reshape my vision to its true form.

The goal with this writing staples is to help shape and mold your vision to what your endgame is going to be – optioning your idea for film, television or the web. Keep your eyes on the prize.

Hopefully, reading this post will relieve your anxiety about tackling your series/film bible. But this isn’t the end of the conversation, you can leave comments below and discuss this even more with your fellow screenwriters along with myself.

Come back next week for registering your screenplay and preparing it for submission.